Due to the organic nature of this product, the numbers listed above are average ranges and may vary. These numbers are intended as a guideline to users. This product is not recommended for use with chemical fertilizers.

Alpha Green Milling Co. Nutrient fertilizer alfalfa pellets are perfect for all your fertilizer and soil amendment needs. Customers appreciate that the pellets are economical, can be applied with good conscience, and build social license while being environmentally-friendly and easy to use. While alfalfa has played an important role throughout the history of land reclamation, proving itself time and time again to be a wise choice for site revegetation and for its natural nitrogen-fixing properties, Nutrient Fertilizer takes those benefits to the next level.

Alpha Green Milling Co. Nutrient fertilizer is a versatile product, making the pellets ideal for a wide scope of projects: 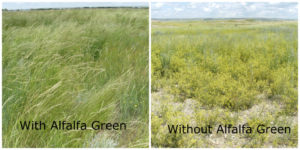 The Evaluation of Natural Source Fertilizers on Kentucky Bluegrass Turf

Read The Evaluation of Natural Source Fertilizers on Kentucky Bluegrass

This in-house tested the effect of Alpha Green Milling Co. Nutrient Pure (AG), formerly known as “Alfalfa Green” on seven vegetables: green beans, lettuce, potatoes, pumpkin, onions, beets, and radishes. Each vegetable was tested with three rates of AG- a control treatment (with no AG), a low rate (equivalent of 1 mt/ac) and a high rate (equivalent of 2 mt/ac). Each treatment had two replicates, and parameters measured included percent germination, number of vegetables per plant, average weight of produce, total weight and length of produce, and average weights and lengths of produce. Each vegetable had different results, however an overall improvement over the measured parameters were seen across the garden in the plots that had been treated with AG.

Study of Alpha Green at Over the Hill Orchards

To test the effectiveness of Alpha Green Milling Co Nutrient Pure  (AG) soil nutrition, a small experiment was designed to measure growth. AG was applied to approximately four acres of sour cherries, consisting of 6 cultivars and approximately 2100 plants. As well as a control treatment, applications equivalent to 1 mt/ac, 2 mt/ac, 3 mt/ac, and 4 mt/ac. It was concluded that the slow release nature of AG provides steady release of nutrients without risk of fertilizer burn

Read Study of Alpha Green at Over the Hill Orchards

Testimonial:  “It is a perfect fertilizer for me… “

Alpha Green Milling Co Nutrient Pure (AG) was compared to common household “Green” ingredients (a.k.a nitrogen sources) such as grass clippings and coffee grounds. The nitrogen sources were layered with vegetable scraps and sawdust in about C:N ratio of about 30:1, then mixed together and watered. Internal temperatures were taken several times a week to monitor microbial activity, and the systems were either watered or drained to maintain an even moisture level. At the end of the 90-day trial period the AGcompost system had already finished composting, and the grass clippings and coffee grounds systems were mid-process. The control system had just gotten started composting. In addition, the AG had temperatures consistently higher than the other systems. The experiment validates the need for a larger, more in-depth study.

Alfalfa Green vs. Manure vs. Compost

Alfalfa Green for Successful Establishment of Native Grasses and Wildflowers

Pictures of Sites with Alfalfa Green